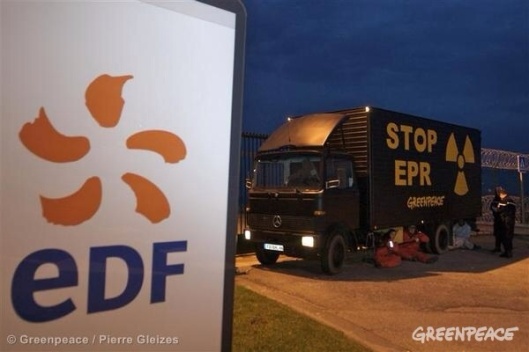 Areva and EDF are both, almost completely, French-government-owned nuclear bureaucracies, active around the world (e.g. Japan, UK, US, China). As we have already discussed, Areva, with a French court, have recently denied the right of free-speech to a Frenchman, by finding him guilty of defamation, against Areva. Importantly, since Areva is French-government-owned, France is essentially stripping him of his right to criticize his own government. See: https://miningawareness.wordpress.com/2014/03/31/adieu-free-speech-in-nuclear-france-areva-rules/

EDF is Areva’s evil-nuclear-twin. Two and a half years ago, EDF was fined for spying on Greenpeace. Areva and EDF are active around the world, and have the full weight of the French government, and apparently the French military (if you look at France’s African invasions, and Areva’s uranium mines), standing behind them. Hence, along with Russian-government-owned Rosatom, we find these evil-nuclear-twins exceptionally dangerous and frightening.

The only hope is that the French government will bring these out-of- control, evil-nuclear-twins to heel, and turn them into renewable energy twins.

It is important to recall, as well, the too-close-for-comfort relationship between the brother of the UK’s head of the DECC (Dept. of Energy and Climate Change), Ed Davey, and EDF. We consider it a conflict of interest, but few seem to mind, for reasons we cannot fathom. See: https://miningawareness.wordpress.com/2014/03/06/uk-energy-secretarys-nuclear-conflict-of-interest-a-commoners-view/

Below is Greenpeace’s account of the EDF spy-scandal (Emphasis our own):
“Don’t Hack the Hippies: Nuclear giant EDF found guilty of spying on Greenpeace Blogpost by Justin McKeating – November 10, 2011 at 17:18

That’s pretty much the chain of events that lead to today’s conviction by a French court of French state electricity company, Electricité de France SA (EDF) for spying on us. The court fined the company 1.5 million Euros and ordered it to pay €500,000 in damages to Greenpeace France. In addition, the court sent the four men involved, two of them senior EDF executives, to jail as well – and fined three of them.

EDF’s spying operation monitored Greenpeace while we challenged plans by the UK government to work with EDF to expand its nuclear operations. Clearly worried about this – and losing the nuclear debate in France, EDF somehow decided a cloak and dagger espionage operation was the way to go. In 2006, the company hired private investigation company Kargus Consultants to spy on Greenpeace France. Kargus went too far, and hacked into, then stole 1,400 documents from the computer of Greenpeace France’s programme director. But they got caught.

The men prosecuted were Pascal Durieux, head of EDF’s nuclear safety at EDF in 2006, Pierre-Paul Francois, EDF’s second in command of nuclear safety security during the same period; Thierry Lorho, the boss of Kargus, and Alain Quiros, Kargus computer scientist.

There are a number of lessons to be taken from this scandal, the first being sections of the nuclear industry clearly regard themselves as above the law. Today’s verdict reminds them that this is emphatically not the case. With the terrible consequences of the Fukushima nuclear disaster still unfolding in Japan the nuclear industry needs to be held to the rule of law like never before.

Secondly, we find once again that the nuclear industry simply cannot be trusted. The history of nuclear power is littered with tales of dirty tricks, propaganda and deceit. EDF’s espionage is merely the latest example in a long line.

Whether it’s the industry and its supporters trying to secretly influence the public debate about nuclear power (as we’ve seen in Japan, the UK, Slovakia and elsewhere), or the greenwashing claims of industry insiders that nuclear power is ‘clean’ while ignoring its contaminated legacies in places like Arlit and Akokan in Niger and Seversk in Russia, or the falsifying of safety reports and important documentation, or highly inadequate safety testing, what we see consistently is a reliance on underhand tactics and deception rather than honesty and transparency.

Why is that? This leads to our third lesson: the nuclear industry doesn’t have faith or confidence in its own arguments. The claims made about nuclear power – that it’s clean, safe, cheap, and able to help in the fight against climate change – do not stand up to scrutiny. Both Fukushima and the twin legacies of uranium mining and long-dangerous nuclear waste show us nuclear is not clean or safe. The sky-rocketing costs of building new nuclear reactors show us it’s not cheap. As for nuclear helping to beat climate change, according to the International Energy Agency, ‘even if existing nuclear power capacity could be quadrupled by 2050, this would reduce carbon dioxide emissions by less than 4 percent’.

And so the industry needs to rely on tactics like spying, manipulating public opinion and propaganda. Can the industry make their case without dirty tricks? No they can’t.

This spying scandal and verdict against EDF couldn’t have come at a worse time for the global nuclear industry which is reeling from the fallout of the Fukushima disaster. In recent weeks and months countries like Germany, Italy, Switzerland and Belgium have turned their backs on nuclear power. The new generation of nuclear reactors (with which EDF are heavily involved) is years behind schedule, billions over budget, and beset by construction defects and safety concerns.

Nuclear power is at the end of the line. The nuclear industry cannot be trusted. They’ve ignored us, they’ve laughed at us, and then they’ve spied on us. But we – with your vital support for which we will always be grateful – are winning.